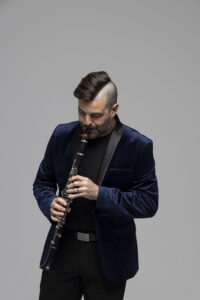 Praised for his “great skill and captivating sound” by Clariperu, American clarinetist Calvin Falwell is quickly becoming a sought after soloist and chamber music collaborator.  His performances have garnered praise from critics and audiences around the world.  A true champion of new music, Calvin has had the privilege of premiering numerous works for both clarinet and bass clarinet including works by Todd Goodman, David Thomas, Max Lifchitz, Suzanne Polak, Bradford Blackburn, Paul Reller, David Stock and Joseph Hallman.

As a soloist he has developed an extensive repertoire for bass clarinet.  Solo appearances include concerto performances with the McCormick Percussion Group, West Chester Percussion Ensemble, South Florida Symphony, Beaver Valley Philharmonic and contemporary ensembles in Philadelphia, Pittsburgh and Louisville.

Currently, Calvin holds the 3rd/Bass Clarinet/Utility chair with the Sarasota Orchestra in Sarasota, FL and is on faculty at the University of South Florida where he teaches in the School of Music and the USF Honors College.  During the summer months can be found performing with the Charlottesville Opera Festival in Virginia and teaching at the Killington Chamber Music Festival in Vermont..

His principal teachers and mentors include Paul Demers (Philadelphia Orchestra), Ron Samuels (Pittsburgh Symphony Orchestra), Tim Zavadil (Minnesota Orchestra), Dallas Tidwell (Louisville Orchestra) and Daniel Lochrie (Nashville Symphony). Both Calvin’s BM and MM are in Clarinet Performance and are from the University of Louisville and Duquesne University respectively and is currently completing his Doctorate in Music at Teachers College, Columbia University.

Calvin lives in Florida with his wife Kerry Falwell, son Zachary and their two cats Ronald & Callie. When not playing Clarinet Calvin is an avid cyclist and races Gravel and Cyclocross for Team Outspokin.